Setting up Your Project

Setting Up The Project for Development

Cloudvanti Sitefinity manages the code and database development repository separately. The two (2) separate repositories provided are for the Source Code and Database which connected to the CI/CD pipeline.

Each Code Repository is provided with a branch called 'Master Branch'. When a code is committed in the Master Branch, it will automatically trigger the pipeline CI.

The Database Repository has two (2) branches:

The function of branches separation is to anticipate that the SQL scripts deployed between Staging and Production may differ. Each of them shall automatically trigger each respective Pipeline CI.

The function of branches separation is to anticipate that the SQL scripts deployed between Staging and Production may differ. Each of them shall automatically trigger each respective Pipeline CI.

The Cloudvanti Sitefinity environment comes with a Git repository for you to place your projects in. You can access it through the Management Portal.

Here is how you can clone your projects into the repository:

Once your files have been cloned into the Git repository, they will be sorted according to the default file structure of Sitefinity known as Default File Cloudvanti (DFC). 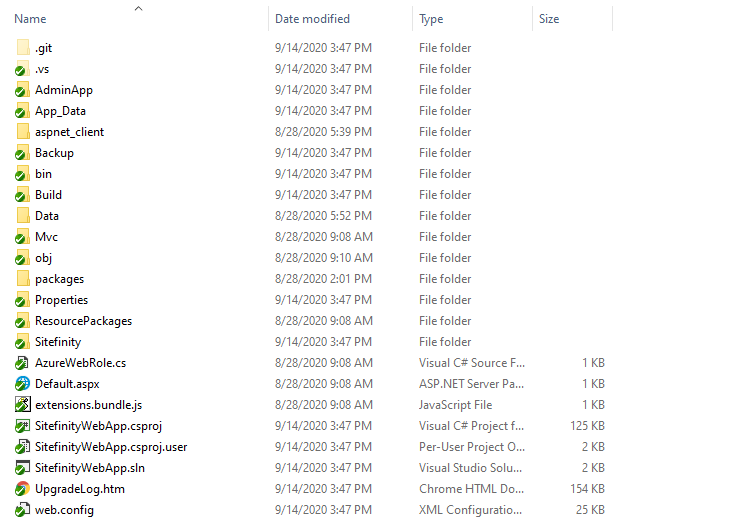 THINGS TO NOTE ABOUT FILES AND FOLDERS IN THE DFC

Cloudvanti CI/CD processes will use files from the DFC. This structure is also applied to existing Sitefinity Projects.

The .git folder will be the first thing you see after cloning into the Database Git repository.

When deploying new scripts, a new folder will be created which contain the new scripts.

The name of folder and files should also comply with the naming convention as follows: